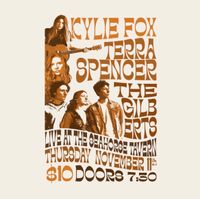 It's folk night at the Seahorse Tavern with three of Atlantic Canada's finest upcoming story tellers. Doors at 7:30pm, Show at 8pm $10 // $15 at the door Tickets can be bought at the venue or available online here https://thederbyshowbar.ca/.../kylie-fox-terra-spencer.../ Terra Spencer// Freshly nominated for Canadian Folk Music Contemporary Singer of the Year, Nova Scotian funeral director-turned-songwriter Terra Spencer discovered her passion for crafting songs while touring with country artist Ryan Cook. Since making her solo debut in 2018, she has charmed audiences with her knack for telling intimate stories with heart and humour, her deft fingerstyle guitar, gospel piano, butterscotch voice, and easy onstage conversation. https://terraspencer.ca/home The Gilberts// Award winning sibling trio The Gilberts deliver emotionally impactful songs, arrangements, recordings and performances infused with choral, Celtic, and country influences. Frieden, Reuben and Maisie, who emigrated to Canada from the UK as young children, are having a banner year with a 2021 Canadian Folk Music Award; a 2022 Canadian Folk Music Awards nomination; two 2021 Music Nova Scotia Awards nominations; the release of their second album; opening for Jimmy Rankin at the Halifax Convention Centre; and a second year as featured performers on ‘Holiday Magic’ a CTV special set for December. thegilbertsband.com

Kylie Fox// Alt-folk Canadiana artist Kylie Fox spins stories of rolling prairies and the North-Western woods, of hometown fables and flames, and of the clumsy dichotomy of youth and adulthood in sophisticated webs of cynicism, beauty, and wit. The gentle timbre of her voice is also rich with power and direction, lending to a performance as honest and compelling as her poetry. She was named Breakthrough Artist of the year in the 2020 PrixNB Awards and is nominated for Album, Song and Video of the Year in the 2021 PrixNB awards. https://kyliefox.ca/